I’m not a victim I am a survivor 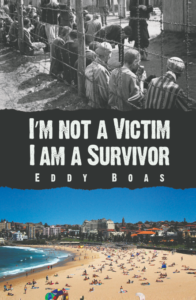 Eddy Boas was born 26 January 1940 in The Hague the Netherlands (Holland), and just 3 months and 15 days old, when Nazi Germany invaded Holland. Both Eddy’s parents were Jewish, Eddy’s odds of surviving were 6,000,0000/1. The Nazis murdered 64 members of Eddy’s extended family, Aunts, Uncles, and Cousins, the eldest his 58 year old Grandmother and the youngest a cousin not even1 year old.

Eddy, his father, mother and brother all survived Westerbork Kamp, Bergen-Belsen concentrate on camp, the ‘Lost Train’ and roaming through Eastern Germany for 51 days, before returning to Holland on 13 June 1945. Where they were met by an unsympathetic Dutch bureaucracy. They had lost their home their possessions, their family and had no money and received no assistance from the Dutch Government.

Of the 107,000 Dutch Jews being transported to concentration camps, 102,000 were murdered by the Nazis only 5000 survived. Per head of population the wost of any other western European country.

This is a remarkable story of survival: a testimony, remembrances of Eddy’s mother and brother, and his research into the history, politics and social surrounding of his early life in Europe after the Holocaust. His family of four father, mother, brother and Eddy entered Bergen-Belsen concentration camp together and, uniquely survived as an intact family of four. According to the International Red Cross and Yad Vashem Holocaust museum in Israel; this is truly unique.

Their lives would never be the same again. Eddy’s father passed away in 1948. Wanting to put the horrors of the Holocaust behind her, Eddy’s mother decided to immigrate, with her children to Australia to start a new life. It’s these early and later events that make for a challenging, moving and, ultimately , uplifting read. In trying to understand what his life has brought and what it means, Eddy can truly say: ”I’m not a victim. I am a survivor”

“I really like that your book is a life story focused on survival. You provide wonderfully varied touchstones that draw readers into your story. These include sections that address the Shoah years, post-war challenges, living/working on a Kibbutz in Israel, your business career in Australia, and the struggles with the Dutch government, among other topics. Thank you for writing it, publishing it, and sharing your story so we can learn from it”.