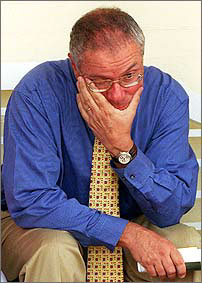 Dress for success or cop an AJC white card send-off

Code violation: Eddy Boas.
The two-toned leather coat worn by Eddy Boas at Randwick races on Wednesday had the look of one hand-tooled in Italy, probably Florence. “It cost a thousand bucks,” the well-known owner and punter, most exasperated, exclaimed. The bucks were probably US.

Boas had just been given a white card by the Australian Jockey Club referee. The card stipulates the dress rules for the members’ area. Of course, the AJC has an escape clause – borrow a coat, even with a tie to match, for a $10 deposit. Usually the coats come from a selection of those left at the function centre.

Boas declined, with threats to never make a rusty Randwick turnstile click again. Going on the 1192 attendance at headquarters on Wednesday, the AJC can hardly afford to lose a patron – let alone one of Boas’s status.

It could be argued that Randwick on Wednesday wasn’t an occasion to dress up, being one of Warren Wilson’s “Woolworths” days. “Product” manager for TAB Ltd, Wilson insisted the meeting be held on Randwick’s sub-standard Kensington circuit when the AJC maintained it would be better placed at Warwick Farm. Wilson had the fine print on a contract in his favour and waved it like a ball and chain. Somehow, Wilson has found a link between racing and Woolworths.

No doubt the AJC wanted to maintain some sort of quality control on Wednesday and, as it couldn’t do it with the racing surface, switched the attack to the members’ stand.

Thus the resilient band who attended this lacklustre meeting, and were entitled to a medal, were blitzed. Boas wasn’t the only victim. Racecourse regular Bob Grynberg, who always dresses for comfort, wasn’t deemed up to standard. Punter’s rep on the Racing Industry Participants’ Advisory Committee Peter Mair went for a regulation style coat that looked like suede.
In 1964 I got rebuffed at the door of City Tatts wearing something similar. Suede was said to moult but I didn’t cop the decision sweet and was dragged screaming and protesting into Pitt Street.

The rationale behind the AJC move, according to catering manager Lynell Peck – who, with gusto and no compassion, is carrying out the dress policy laid down by chief executive Tony King – is that members had complained about the slackening of dress standards.

Perhaps a comparison could be that they don’t let anybody into Big Tatts in Long Bay dungarees regardless of the weather or the offering of the day. And try playing golf at Royal Sydney without the appropriate gear.

So at Randwick the white card informs that gentlemen “are required to wear suit, sports coat or blazer and tie, except during the period of daylight saving when coats need not be worn, provided braces aren’t showing”.

Dress in the members’ stand at race meetings has always been an issue on Sydney tracks. Possibly it stems from the more formal approach of the British where top hat and tails in the Royal Enclosure at Royal Ascot is imperative. This is followed to a degree on derby day at Flemington. Sydney is more easygoing but not when it comes to leather and suede and anything but the regulation coat length.

Fortunately I missed the card. My coat, purchased at Sachs in New York, is a fine three-quarter-length item and the pride of my stable. Underneath, though, I had a pullover. Damn, there goes my cover for Randwick tomorrow.

Mind you, I’ve been getting racecourse dress rules drilled into me since I was a copy boy. My first boss, Jack Charles maintained his staff must wear a hat to the horse sports. In fact, he questioned the sexuality of anyone who didn’t. On this theory, ex-jockey Roy Horton, at Randwick on Wednesday, was just about the only punter who was straight.

Maybe the best-dressed punter to ever go to the track was the late “Hollywood” George Edser, who would take a change of shirt. Still he, too, once received a card from the AJC. It said “warned off”. A matter of non-payment of a couple of hundred thousand. But nobody could say he never looked the part. You just don’t get enthusiasm like that in this TAB or Woolworths racing age.

Of course, the ladies have always had it good at Randwick. While men have had to swelter in suits and a tie in raging temperatures the ladies can get away with wearing little more than a handkerchief. Surely in this day of equality they are entitled to be as uncomfortable as men. Peck said the white card will be distributed in future to fillies and mares who fail to comply with the “no shorts, jeans or brief clothing” rule. We’ll be watching with interest.

Not that they have had a completely trouble-free run. Gai Waterhouse, as stylish as Hollywood George and with a much better credit rating, some time ago had trouble due to culottes, some type of tailored shorts. She was stopped as if she was Bea Miles trying to crash the AJC committee luncheon. (Bea Miles was a colourful Sydney personality, built like a front-rower, who specialised in refusing to get out of taxis.)

Once the STC, always less aggressive with dress, dabbled with the introduction of shorts and long socks but on consideration the late Sir Clyde Kennedy, then chairman, choked on his cigar.

“Can you imagine the legs on some of these old blokes?” Sir Clyde grimaced.

The STC dropped coats and ties in summer long before the AJC, which led to some confusion. Dr Geoff Chapman, then a trainer, was deemed unfit for the enclosure due to his garb and gave riding instructions over the fence to his jockey.

These days the Doc is more into colourful braces at Main Beach on the Gold Coast. Definitely white card material at Randwick.

Dress note: During the week, TAB Ltd sent Tony King a present – a pair of boxing gloves, one signed by Kostya Tszyu and the other by Jeff Fenech. King responded: “My father always told me never use your hands only when you can use your feet. I prefer a set of hobnailed boots.”

They certainly would adhere to the AJC dress code – “running shoes, including sandshoes, gym boots and thongs are not permitted” – and also would be useful for walking the Kensington track.