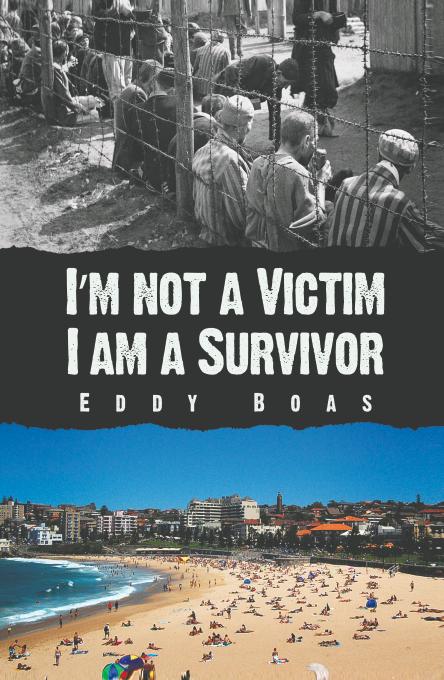 For The First 5 Years of My Life, I Lived in Hell

I’m not a Victim, I am a Survivor

Born in January 1940 in The Hague, Holland, to a Jewish family, I, Elias “Eddy” Boas spent the first 5 years of my life in the living hell that was the Holocaust.

While my extended family were all but wiped out with 64 Cousins, Aunts, Uncles and Grandparents aged 3 to 73 all murdered. Myself my brother, father and mother were all sent to Bergen Belsen and the Red Cross advised me they have no records of any other family, father, mother and 2 sons going into a concentration camp and surviving as a family, as we did. The odds of that happening just can’t be calculated.

Even after surviving the concentration camps, the lost train and nearly 2 months of roaming through East Germany as a 5 year old, I was on the verge of death due to Typhus, but was saved by the incredible kindness of an English soldier, Captain Douglas. A man that I owe my life to and a man whose family I tried to find (with no success) and thank for the act of kindness that enabled me to lead a truly remarkable life.

Up until August 2002, I had never tried to discover how I survived the Holocaust. My recollection of the wartime period from 1940 to 1945 and what transpired between 1945 and 1954 has been blocked from my memory.

My memories begin the day I arrived in Australia on 14 March 1954.

This book is about my feelings and interpretation of how my family were betrayed by a Dutch population whom they had lived with as neighbours for hundreds of years, and how an unsympathetic Dutch government and Dutch bureaucracy treated my family and other Jews during and after the horror of the Holocaust with a total lack of empathy.

In my early years in Australia I led a quiet life. I went to school for 2 years, left school at 15 and had various jobs including in 1989 being appointed President of a company, located in New Jersey, and part of a Wall Street listed multi national organisation.

I did not look back nor did I make plans for the future. My life was simple, and I lived by the rule: Whatever happened yesterday I cannot do anything about; tomorrow, who knows what will happen; but today I can control. This is how I took control of my life and it has served me well.

In 2002, during my recovery from a heart bypass, my wife Donna suggested I should write a book how my family were able to survive the Holocaust.

This has been a long and difficult road; it has been frustrating, emotional and at times depressing.

I investigated how it was that my father, mother, brother and myself were able to survive five years of hell – including 434 days in Bergen-Belsen concentration camp – when millions had not.

My findings from over 15 years of investigation are detailed in this book.

During my investigations, I dealt with many different government agencies and various organisations, mainly in Holland but also in Germany, Israel and the USA. Some were helpful, others were not. No Dutch Government has ever apologised for the manner in which Dutch Jews were betrayed. Most other Western European countries have fully apologised for the sufferings that their Jewish population had to endure.

Trying to discover what happened to our possessions and assets as well as those of my 64 murdered family members, I reached one dead end after another. It was truly exasperating. Where did the money, the jewellery, the furniture and the bonds go?

In February 2016, I engaged an experienced Dutch investigator who has carried out projects for the Amsterdam Jewish Historic Museum. We discovered that my grandmother, who was murdered in Sobibor, had bonds with a bank that is now part of ABN AMRO Bank and also with a petroleum company that is now part of Royal Dutch Shell. Our investigations discovered that all companies agreed the bonds were held by the bank during the war, but no one can now identify what has happened to these bonds. There are no records showing these bonds were paid out, so where is the money?

Insurance policies were another area of frustration, since it was nearly impossible to establish a definite date and cause of death, the Dutch government set up their own rules and interpretations. After the war, Jewish survivors had to deal with a mostly hostile Dutch bureaucracy. The facts are that returning Jews, like my parents, were treated with no empathy or understanding of what they had been through, and to my parents it seemed as if the Dutch government would rather they had not returned at all.

Australia has been good to me I have lead a successful and happy life, raising a family, and in 2005 starting my own businesses with 10 employees, and sold the business in 2007 with 120 employees.

How did Germany, a nation of seemingly well-educated, intelligent people – doctors, judges, lawyers, teachers and professors – become a nation of mass murderers?

We are the only family that went into a concentration camp as a family – father, mother plus sons aged 8 and 4 – and came out as a family.

Red Cross records of Boas family, as far as is currently known.

Yad Vashem advised that while such occurrences are not recorded

by their organisation, it is a somewhat unique statistic.

The Netherlands government recognises completely – looking back with the knowledge through the eyes of today – that there was too much formality, bureaucracy and most of all the lack of compassion in making right what happened in the past. Therefore, the then government in 2000 did express regret and remorse to the individuals who had suffered during this period, without excusing the wrongdoing by the individuals who had the responsibility at that time.

in answer to my question why no Dutch Government has ever

Per head of population, more Dutch Jews were murdered by the Nazis than those from any other Western European country.